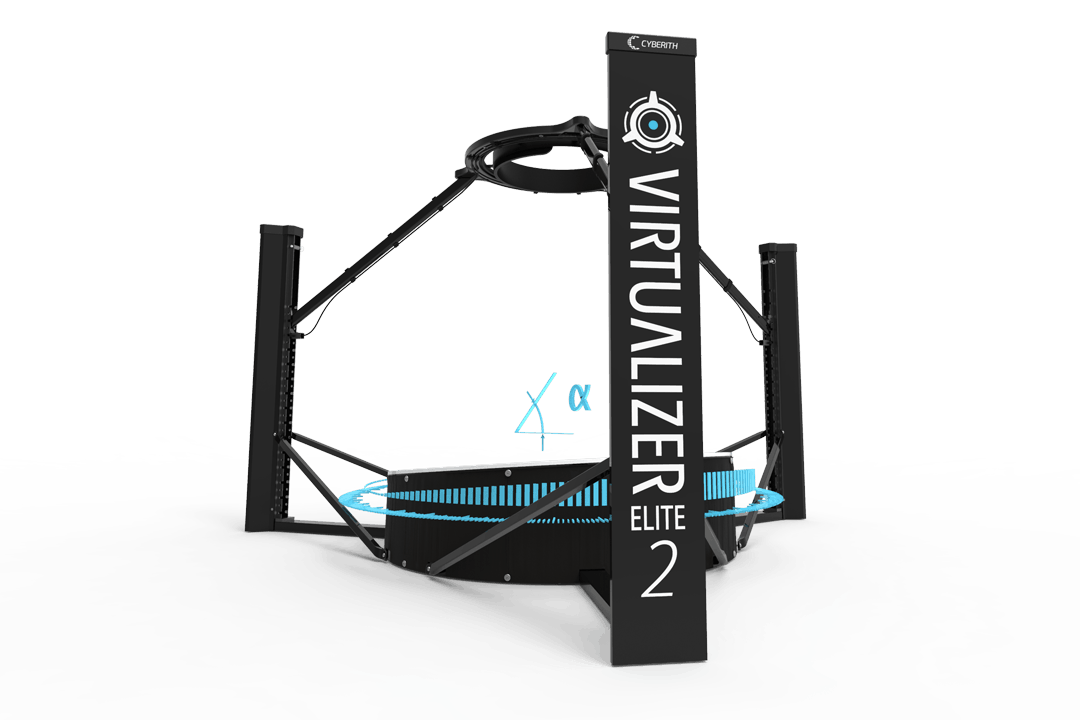 Years of continued product development at Cyberith led to the second generation locomotion device for VR, that actively supports the user’s gait through a Motion Platform: The Virtualizer ELITE 2

This innovation concerns what a VR locomotion product really is about: Allowing everyone to easily walk and run in Virtual Reality.
Thus, the new product focuses on two points, which are critical for us and for most of our customers:

How does it work?

The second generation Virtualizer allows to set an angle of inclination, that can be adjusted individually and adapts to the users movements.
In case a user walks straight ahead, the platform is slightly elevated in front of the user, supporting the movement and reducing the effort related to the feet gliding backwards. If the user turns, the platform moves in a way, that it continues to be slightly elevated in front of the user. The product does that without rotating the platform itself, but only by lifting and lowering the baseplate in two axes. Thus, the inclination rotates with the user, without requiring the platform to rotate at all.

This new concept, that uses an actively powered motion platform to support the user’s walking movement, strongly reduces the physical effort for walking in VR and enables the fastest learning curve of all VR locomotion devices. A novice user, who has not ever been using a similar product before, can step onto the platform and get started immediately.

As we are using a flat surface with an individually adjustable inclination, the system works well for everyone, independently of the user’s height or weight.

After launching the new product in March 2019 at the Laval Virtual International Conference & Exhibition on VR & AR, the Virtualizer ELITE 2 received its first mayor update in June of the same year.
After performing the software update, the inclination of the implemented 2 DoF Motion Platform does not only react to the user’s preferred individual setting and his or her orientation any longer. Since then, it also reacts to the user’s walking direction (forwards or backwards) and to the individual walking speed when running.

Since then, the platform reverses its inclination in case the user is walking backwards in order to optimally support a user in performing backwards steps.
Also, when a user is running, the platform’s inclination is reduced dependent on the running speed. The reason for that is, that the posture of a sprinting person is leaned forwards usually. Thus, a slightly lower angle of inclination is required in order to optimally support the user.

31. May 2019
Close Menu
This site use cookies to enhance your user experience. By using this site you agree to the use of cookies.OK